Peace must grow from within

Worldwide, democracy has to face many challenges nowadays. The Agenda 2030 of the United Nations identifies the promotion of peaceful and inclusive societies worldwide as one of its key goals. From 8th to 9th February 2018, the Dresden Forum for International Politics focused on the question, how can peaceful social relations be achieved and sustained? Vera Baboun, former mayor of Bethlehem, attended the panel discussion “peace must grow from within – but how?” She is persistent in her effort to conclude peace not only in Palestine and Israel but also worldwide.

Engagement Global: Ms. Baboun, in 2012 you became the first female mayor of Bethlehem. What was your motivation to run for the office?

Vera Baboun: As an adamant believer in women’s leadership capacities and rights, I have steadily trusted the fact that “a better democracy,” as Michelle Bachelet points out, “is a democracy where women do not have the right to vote and to elect, but to be elected.” Still, the political occupied context of Palestine and its social patriarchal discourse were two substantial challenges that I had seriously considered in my mayoral candidacy decision. Simultaneously, I had evolving personal uncertainties on whether my Palestinian community is ready to elect a woman mayor, and whether women, more than men, believe that a woman can do it. Both uncertainties, though, motivated me to be the change that I want to witness in my own community. Winning nine seats out of fifteen, I was announced on November 15, 2012 as the first elected woman mayor of Bethlehem Municipality since its inception in 1872, and its 16th elected mayor. My uncertainties could not have been defied without my motivation to be the change I want to witness in my life and my community.

EG: What were the biggest obstacles you faced after succeeding the office?

VB: Being the head of the Bethlehem Municipal council which comprised fifteen members (12 men and three women), it was considerably irritable and intolerable for some male rivals in the council. Whether it was their male-pride consciousness or their rivalry tendency, I had to practice double efforts to lead the council and implement my election agenda. I had to encounter a male mentality that opts not to acknowledge a woman’s capacity to lead. Consequently, constant and systemized oppressive practices were conducted and reached even to conspiracy. These were considerable obstacles mainly since I have never opted to stand as a loser. I had to stand firmly to all who elected me, my city, and myself. I have never considered the loss of the position, as much as I considered the loss of my voice as a woman leader, and as a role model for many women in my Palestinian community. Despite the obstacles, I terminated my mayoral post on May 25th, 2017 with a more empowered voice, experience, and determination to lead a new change.

EG: When you think of your mayoralty, what are the three most important moments that you remember?

VB: My mayoral inauguration ceremony on November 15th, 2012 as the 16th mayor of Bethlehem Municipality and its first elected woman mayor. I knew then, that I had taken the road less travelled by other women. The citizens’ vast attendance in the inauguration ceremony and their supporting presence was a moment I will always cherish. On September 28th, 2015, the day the Palestinian Minister of Local Governance approved the increase of the Bethlehem Municipal borders. This achievement enabled the council to work on the city new Urban Master Plan which was not developed since 1958 due to different political factors. The very significant moment was on May 25th, 2014 during the visit of his Holiness Pope Francis to Bethlehem. In his way to the Manger Square to hold the Holy Mass, Pope Francis stopped his popemobile to pray in front the Separation Wall in Bethlehem: “bridges should be built and walls dismantled.”

EG: During the Dresden Forum for International Politics last week you said that „ in order to reach a solution in the Middle East it must be recognized that continuous occupation affects the lives and ambitions of thousands of youths.” What needs to be done to improve the situation of young people?

EG: As the first female mayor of Bethlehem and lecturer for Gender Studies you are a role model to girls and women: Do have a message to those who want to change something but feel unsure about it? 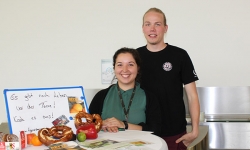 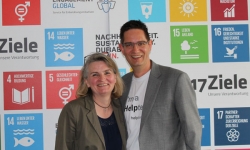